With a bicycle simulator, driving tests can be carried out in a virtual environment. Investigations of the influence of age, illness, fatigue, distraction or psychoactive substances on the behaviour of cyclists are only some of many possible applications. In addition, the bicycle simulator can be used to investigate effects of changing environmental conditions on perception and behaviour of cyclists – for example after road construction changes or due to the introduction of highly automated vehicles. 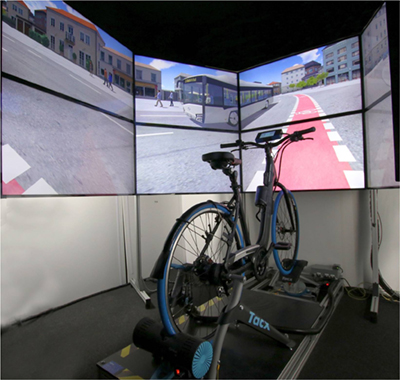 Bicycle simulation has several advantages over real road traffic studies. First of all, this includes high controllability and standardization in the simulator. Here, traffic scenarios can be specifically depicted and reproduced in the same way. This makes it possible to confront test persons with scenarios that are very rare in reality. Interactions with other road users can also be achieved, which is difficult to achieve under less standardised conditions.

A key advantage of the simulator is that there is no danger to the driver or other road users. The investigation of effects of psychoactive substances or distracting activities is therefore frequently investigated in simulators. The same applies to the investigation of driver behaviour in critical driving situations. Due to the potential danger, provoking such situations in traffic would not be justifiable. In addition, the bicycle simulator can be used to check the influence of technologies that are still in development or have not yet been approved for use on public roads: For example, highly automated vehicles can be simulated in the surrounding traffic of the bicycle, whose influence on other road users is difficult to investigate due to the lack of distribution in real traffic.

The bicycle simulator of the BASt

The BASt’s bicycle simulator features 10 high-quality Full HD large-format displays with a 48-inch screen diagonal, enabling a viewing range of up to 300 degrees. The high resolution of the monitors allows a detailed representation of the traffic situation and the environment.

For a realistic overall impression, a bike mockup consisting of a 28 inch trekking bike with a 50 centimetre frame height is used. A dynamically mounted base plate allows easy tilting movements of the bicycle and ensures a realistic riding feeling. The electronic 11-speed gearbox, which can be controlled via the simulation, enables comfortable driving. By linking it to a Tacx Genius Smart turbo trainer, it is possible to simulate inclines or descents as well as a pedelec function (pedal support). A freely programmable touch display on the handlebar allows the display of any information or ancillary tasks. These can be, for example, navigation instructions or various menu structures of an information system.

The bicycle simulator is operated by 9 networked computers. Driving noises and noises from other road users are presented via Sony WH-1000XM2 over-ear headphones.

The SILAB software for operating the bicycle simulator has been specially developed for requirements of experimental studies. It allows free designing of the track geometry and surrounding landscapes. It also enables the targeted control of the behaviour of other road users. Thus even complex interactions, for example with other vehicles or pedestrians, can be displayed. In addition, the sequence of traffic scenarios during the journey can be changed depending on the behaviour of the drivers.

All data is recorded for later analysis. This includes, among other things, operator inputs by the driver, parameters for driving behaviour and route geometry as well as positions of other road users. With a graphical user interface, parameters can be changed during simulation and data recording can be monitored.

The test run is recorded by a camera in order to obtain additional information about the behaviour of the cyclists.