Seeing and being seen are important preconditions for safety on the road. The latter particularly applies to road markings which can be considered as an essential element of visual guidance for the road user. Motorists (including motorcyclists), in particular, must be able to trust these road markings, both in the daytime and at night – and particularly in wet conditions. 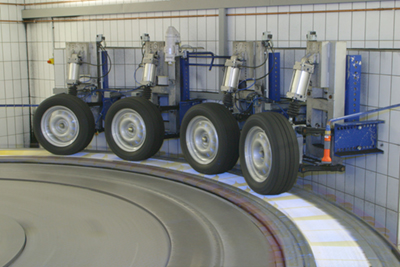 To ensure that road markings meet the requirements with regard to safety as well as durability, the Federal Highway Research Institute (BASt) has been conducting approval tests since 1957 on behalf of today’s Federal Ministry of Transport and Digital Infrastructure (BMVI). The suitability tests were initially carried out according to national regulations and – since 2000 – according to European standards.

Until the middle of the 1980s, road markings were tested only on test beds in real traffic conditions. These test beds, however, suffered from the critical disadvantage that results only became available after the actual test period. Moreover, it also proved necessary to close off roads and divert traffic when applying the markings and conducting the periodic measurements. This, in turn, led to traffic conflicts and great danger to the personnel involved in carrying out the work. Such a procedure is no longer conceivable in view of the traffic density prevailing on the roads in Germany today.

The road in the laboratory

In order to continue with the approval tests, the BASt developed a test method, which is less complex and more informative under the same boundary conditions than was possible with the test beds due to the imponderable factors involved in the latter case. The turntable road-marking test system (RPA) has enabled the road to be brought into the laboratory. This is a special facility, at which suitability tests were conducted for the first time in 1989 after many years of development and trials.

The RPA essentially consists of a horizontally arranged turntable with a diameter of 6.40 m, on which up to 20 different road markings can be tested at the same time. The road markings are loaded with up to eight test wheels, which produce the same degree of wear as real vehicles in traffic.

The road markings are applied on special test specimens, whose composition and surface correspond to a finely structured road surface consisting of mastic asphalt.

The test certificates issued by the BASt form the basis for tenders and contracts when road marking work is awarded by the road administration departments of the federal states responsible for federal highways.

In addition to marking systems, other elements, generally intended for temporary use, but also partly for permanent use, such as signals, are also tested.

The high performance of the RPA has led to the road marking industry becoming extremely active in recent years. The industry uses the capabilities provided by the RPA far more frequently than was the case with conventional test beds. A wide range of road marking systems has been tested to date and the range of products has been consequently substantially expanded.

The environment has also benefited from the turntable road-marking testing system. For example, only low-solvent paints and – to an increasing extent water-soluble materials – are used for road marking today. Heavy metals no longer have to be used for yellow marking materials.

The knowledge gained from the suitability tests using the RPA, which are continually compared with the results from practice, are incorporated into national and international regulations, and thus serve to improve road safety.