View of the light hall of BASt (Photo: Reinhard Tews)

The communication between the traffic participants and the road is much more complex and also mainly of a visual nature. Experts estimate that more than 90 percent of all information in road traffic is obtained by visual means. Visual communication is usually facilitated by light signalling installations on the road and by appropriate illumination.

A large part of the road installations is intended for visual communication: traffic signs, variable message signs, road markings, marking buttons, light signalling systems and other signalling devices, warning lights, reflectors on marking posts and traffic guidance walls. These systems are classified as active or passive lighting systems, depending on the way light is provided. Active devices have their own light source (lamp, LED), while passive devices function through interaction with the lighting system of the vehicle.

All lighting systems are subject to continuous technical development, which is monitored and partially guided by BASt. Testing and inspection of these objects and materials is also part of the responsibility of BASt. This includes appropriate lighting tests and experiments in a 70-meter-long and 12-meter-high, completely dark light hall. The hall has no windows and the walls and the bottom are painted in black to prevent reflections. 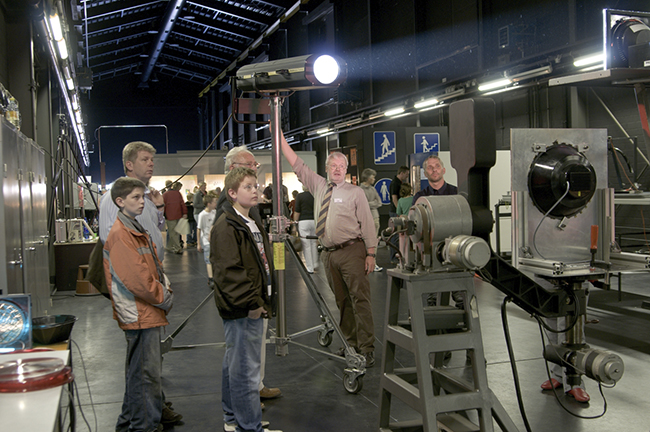 The test equipment required for the test is permanently installed in the light hall. This includes, for example, a large rotating frame with a goniometer, on which samples can be positioned during measurements with an angular accuracy of 1/100°. Lighting properties can be set and measured for a variety of observation angles and the lighting characteristics of signal lights, such as luminance density, light intensity distribution or signal paint seen from a large measuring distance can be reliably tested. The goniometer can support even very large traffic signs.

The results of the lighting experiments and tests are used in national and European regulations. BASt also plays an important role in the development of harmonised European standards for road installations with an illumination function.

The light hall cannot only be used for testing lighting devices. Due to its size, it allows special observation tests to assess and improve the signalling effect of various products. 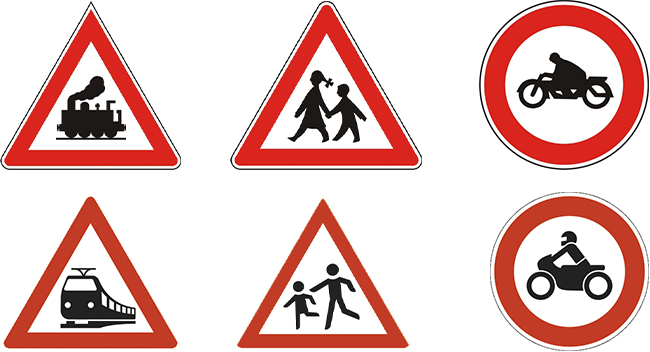 An example is the optimisation of traffic signs. Based on the finding that simple patterns and shapes can be recognised faster than complex images with a lot of detailed information, the visual impact of traffic signs is checked and optimised at BASt. Previously, the symbols on traffic signs were displayed with details, for example feet, hands and hats of pedestrians or building workers. Today, these symbols are reduced to pictograms that only show key characteristics. The observation tests required for this work are performed in the light hall of BASt.

The environment also benefits from sensible technical developments and tests in the light hall. In particular, the use of light diodes (LEDs) as a long-life, energy-efficient light source for light signalling systems and variable message signs is supported by BASt and tested in the light hall with regard to technical feasibility. The energy consumption of modern light-signalling systems and variable message signs with LED technology has reduced the energy consumption to one tenth of that used for lamp-based systems.