Due to the harm posed by air pollution over roads to the environment and residents, relevant European guidelines were converted into national legislation specifying limiting, target and threshold values for selected air pollutants to ensure the protection of human health and the environment. To measure the pollutants nitrogen oxygen NOx as well ozone O3 and particulate matter PM10 / PM2,5 / PM1 the Federal Highway Research Institute BASt currently maintains three sections on heavily travelled motorways. 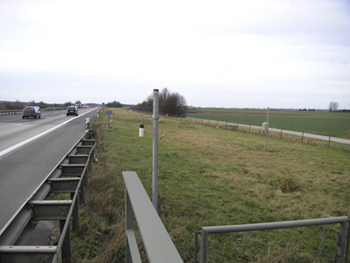 As toxic substances, NOx contribute significantly to general air pollution. They arise at the high temperatures prevailing during combustion processes. These processes mainly generate NO which, on attaining the troposphere, combines with atmospheric oxygen O2 to form NO2. Extremely reactive, NO only has a short life span, thus acting primarily in the region where it originated. However, the lifespan of NO is shortened with increasing presence of reactive particles such as O3.

Elevated levels of nitrogen oxide have been found to increase incidences of respiratory ailments and damage to vegetation.

Due to its easy passage into lungs, fine dust in its pure form is a chief carrier of pollutants, thus posing a hazard to human health. The smaller the particles, the deeper they and the accompanying foreign bodies are able to penetrate lungs. This way, heavy metals and other toxic pollutants (such as polycyclic aromatic hydrocarbons, PAH) can reach the pulmonary alveolus under certain circumstances.

Solar radiation acting on the original substances comprising nitrogen oxides and hydrocarbons leads to a formation of ozone in the Earth‘s lower atmosphere. In the presence of other reactants, the associated radicals assume the role of ozone as NO oxidizers. This leads to excess ozone production. In addition to the original substances, solar energy plays a decisive part in ozone formation. Measurements have established a direct relationship between long sunlight periods and ozone levels that exceed the threshold values. As an extremely reactive substance and strong oxidizer, ozone not only damages materials and plants, but also poses a health hazard. 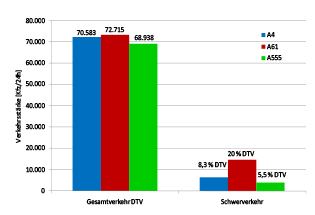 Comparison of average daily traffic volume and the proportion of heavy goods vehicle traffic at the measuring sections on the Motorway A 4, A 61 and the A 555 (Data: BASt, reference year 2007)

At all three locations, an equal average daily traffic (ADT) of approximately 70,000 vehicle/24h was registered. The proportion of heavy goods vehicle traffic (SV) however, differs significantly: The locations on the A 4 and A 555 produced relatively low levels at 8.3 percent and 5.5 percent; in contrast, the A 61 produced a relatively high level of 20 percent. This allows for statements on how different traffic parameters affect the state of pollution at highly frequented motorways.

Measurement section on the A 4

Measurement section on the A 61

Measurement section on the A 555