Our road network contains a large number of engineering structures: tunnels, bridges, supporting structures or openings. They are exposed to many different impacts during their useful life.

To ensure the smoothest possible flow of traffic, engineering structures must satisfy the requirements of the technical regulations regarding stability, suitability for use and durability.

One of the tasks of BASt is to specify these requirements in terms of engineering structures, and to introduce them in the relevant committees.

The BASt load frame is available for testing the structural stability and suitability of engineering structures – especially supporting structures –and for studying the properties of road surfaces. It was established in 1983 to investigate large-scale structural elements and realistic constructions. 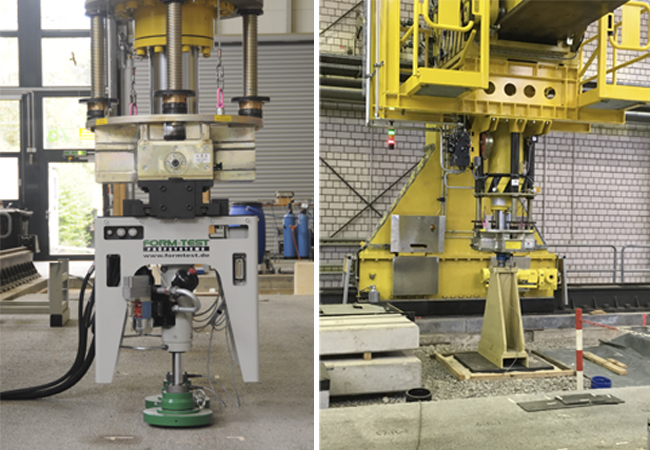 The load frame now makes it possible to apply static loads between 100 and 2,000 kilonewtons (approximately 10 to 200 tonnes) to a structural element or a system. The master cylinder was additionally fitted with a tool holding mechanism during the course of modernisation.

A tandem cylinder can be secured to this mechanism which, combined with a further hydraulic unit, enables dynamic loads of up to 50 kilonewtons per cylinder at a frequency of up to five hertz to be applied. In conjunction with this dynamic module it is possible, for example, to conduct tests on the dynamic load of expansion joints, openings and concrete road surfaces.

A test pit over three metres deep and made of reinforced concrete is located under the load frame for setting up large-scale trials. It can be sealed off and divided up into individual sections.

After conclusion of the load frame modernisation, initial tests on the stress of lateral dummy joints on a concrete road surface were conducted on a model road. Using a tandem cylinder, it was possible to simulate up to five million axle transitions each and determine their impact on the development of the structural strength of the road. Future plans are to use the load facility to investigate coupling elements on special prefabricated part systems for concrete road building.

Tests on the inner structural stability of gabions are currently being conducted at BASt using the load frame. In addition to static load tests on individual gabions, corresponding tests are also to be conducted on supporting structures made of gabions. The results of these tests are intended to contribute to inclusion of structural stability requirements for these supporting structures in technical regulations.

The modernised test facility also permits testing of very diverse components and other structures, such as ground-composite structures.

The load frame can also be used by external companies or institutions. 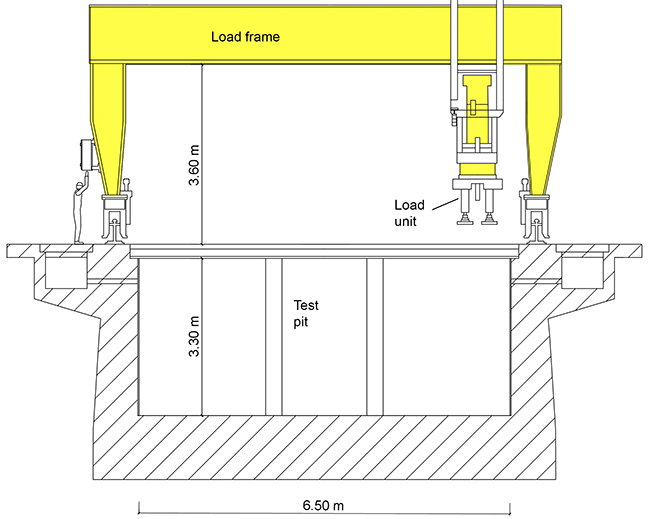 Schematic drawing of the load frame with test pit