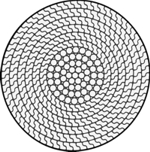 There are more than 40 large road bridges with bridge cables such as stay cable bridges and suspension bridges in Germany. The designs which are mainly lean and filigree can be used to span very wide distances. Until recently, only full lock coil cables were used in Germany but there is an increasing tendency to use special tensioning elements in new structures which are similar to the tendons which are used in prestressed concrete structures. They are made of individual strands, they therefore being referred to as strand cables.

Full lock coil cables are tension members which comprise round wires and a minimum of two layers of Z-profiled wires. They are completely manufactured at the factory together with their anchoring before they are transported to the construction site in a ready to install condition. Spinning is carried out fully mechanically, each of the wire layers being provided with helixes which have an alternating direction. An additional designation that was used in the past was safety lock cable and these have been used to construct bridges in Germany for decades.

Strand cables are tension members which comprise stay cable strands which are parallel to each other and provided with an outer casing. They are then assembled from individual components on the construction site. They were frequently also referred to as parallel strands and have only been in use in Germany since the construction of the Rügen Bridge in 2004.

The use of cables as supporting elements necessitates them being connected to the superstructure and the pylon in a non-positive manner. Full lock coil cables can be connected in this way by using rimmed anchors. In order for this to be carried out, the ends of the cable are fanned out as evenly as possible to form a cable broom, inserted into a casting sleeve with a conical interior, before it is subsequently cast with a metal alloy. When using strand cables, each of the stay cable strands is anchored into a solid anchoring block by means of a three-piece wedge which has a high vibration resistance.