Event reporting according to the General Circular Number 03/2008

On 30/04/04, Directive Number 2004/54/EC of the European Parliament and the European Council dated 29 April 2004 governing the minimum requirements for the safety of tunnels in the European road network was implemented. As part of the national implementation of the EC tunnel directive, the national rules and regulations, known as the "Directive for the Equipment and Operation of Road Tunnels" (RABT), 2003 edition, was revised and implemented as the 2006 edition by means of General Circular Number 10/2006. With the implementation of the RABT 2006 on 27/04/2006, the EC Tunnel Directive became national law.

The implementation of the EC Tunnel Directive and its incorporation into the RABT 2006 meant that the member states had to submit reports to the EU Commission every two years. These reports should contain information about the frequency and causes of serious accidents and fires in the tunnels of the European road network (TERN) as well as about the effectiveness of safety devices and measures. To ensure that the data required with regard to the tunnel events would be uniformly collected, a report sheet was compiled that has to be completed and forwarded to the BASt by the relevant administrative authorities in terms of ARS Number 10/2006 and Number 03/2008 for tunnels with a length of more than 400 metres on German federal highways. 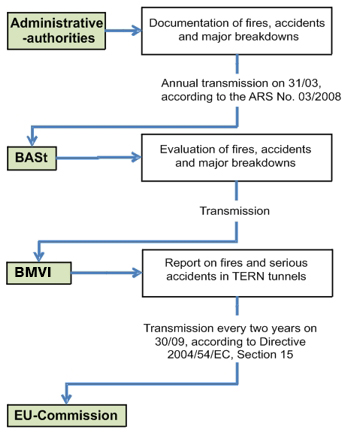 The focus of the subsequent evaluations has been on the various events and their causes, with the causes of the different periods and magnitudes of such events being compared. Further evaluations will be based on the object-specific data so that various events can in similar constructions can be compared. A main aspect of the EC Tunnel Directive is to enable an evaluation of the influence of the various safety devices and measures. The function, effectiveness and acceptance of the devices and measures used in the various constructions are to be considered in relation to the events that have occurred there.

The event report sheet was implemented after a successful test phase in the spring of 2008. Apart from the events reports to the EU Commission, the results of the event evaluations are to be made available for the execution of risk analyses according to RABT 2006.