Accelerated Pavement Test (APT) facilities are being established around the world for the execution of accelerated and realistic load tests on pavement structures. In most cases, these tests are being conducted through the use of a rolling wheel load for load application. 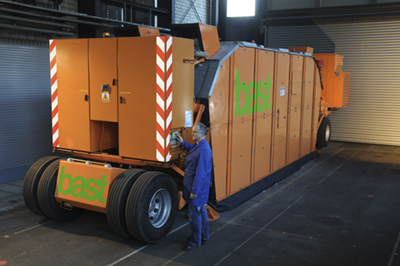 Test facilities can be classified according to the following criteria:

The Mobile Load Simulator MLS30 has been developed to meet the test requirements. Developed from very large and unwieldy load simulators, variations of these devices were initially designed to allow the execution of load tests using a one-third scale device: Model Mobile Load Simulator MMLS3. The further development of these variations led to the design of the mobile, full-scale load simulator MLS30 for the execution of full-scale accelerated pavement testing. The MLS30 is used by the Federal Highway Research Institute (BASt) and has been designed to simulate traffic loads by using a rolling wheel load to apply load along a linear track. Inside the MLS30 are four test-wheels which are used to apply a variable wheel load of between 45 and 75kN on the test structure.

The test-wheels are contained within bogies which move in a closed chain on guide rails in a vertical-oval direction. This movement ensures the realistic, unidirectional application of load to the pavement structure.

With the possibility of applying up to 6,000 axle loads per hour, it is clearly evident that more axle loads can be applied than at comparable full-scale accelerated pavement testing facilities.

For the structural monitoring of the test set-up, it is essential that sensors within the pavement structure and additional measuring devices are employed.

The MLS30 impacts on the pavement structure through its four test-wheels. This load impact causes a reaction within the pavement structure which is then recorded by the integrated sensors, processed and saved for further assessment. The relevant physical data observed includes elasticity, compressive stress, speed and acceleration, as well as air and pavement temperature.

This data is also used to monitor the MLS30: the sensors allow changes in loading condition to be detected and consequent measures to be taken.

Non-destructive testing is executed through the use of devices, such as a Falling Weight Deflectometer (FWD), Ground Penetrating Radar (GPR) and a Profilometer for the measurement of the surface evenness. During this process, load-bearing capacity as well as layer thickness and inhomogeneities are evaluated. The Profilometer identifies the transverse evenness of the pavement and illustrates the surface properties in conjunction with surface images. Depending on the test being conducted, additional methods can be implemented.

Tests conducted at BASt testing facilities using the MLS30 are completed with the main aim of assessing the structural substance as well as evaluating the durability of innovative building materials and practices.

Please send an email if you would like information on conducting Accelerated Pavement Tests (APT): APT@bast.de