For over 60 years, the BASt has been working to improve the safety and performance of our roads.

The Fifties – The establishment 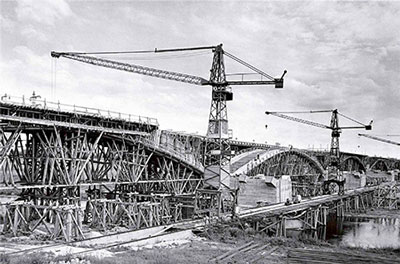 The reconstruction of Germany heralds a massive development of road traffic, with a fourfold increase in the number of vehicles between 1950 and 1960. The war had witnessed considerable damage caused to roads, bridges and tunnels.

The 1950s see a development of the BASt's tasks particularly due to the problems of constructing and repairing roads, bridges and tunnels.

Its work focuses on examining foundation soils and building materials. A major role in this task is played by measurements and expert assessments. Many studies also concentrate on road surfacing. Following years of isolation, German engineers establish contact with other countries and exchange their experiences with their colleagues abroad.

The advising and training of road constructors in West Germany in modern technologies and procedures is also a key field of activity in this period.

The Sixties – Accidents in road traffic 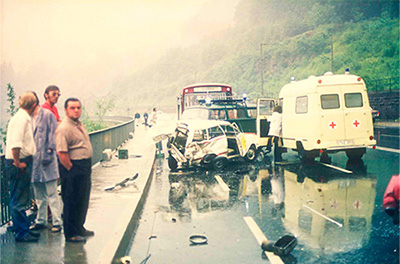 The economic boom is not only associated with the high degree of motorisation. It is becoming more apparent that the increase in individual traffic in the Federal Republic of Germany is also creating problems. The figures of people annually killed in road accidents rises from just over 14,000 in 1960 to almost 20,000 in 1970. Traffic accidents become a top-priority subject. New vehicles enter the market. They are faster and require different roads. Traffic engineering grows in importance.

In 1965, the BASt is renamed the "Federal Highway Research Institute". From being responsible strictly speaking only for roads, it is now additionally commissioned with raising the performance of the roads and improving traffic safety.

In 1970, the BASt becomes the central point for road traffic accident research in Germany.

The Seventies – Active and passive safety 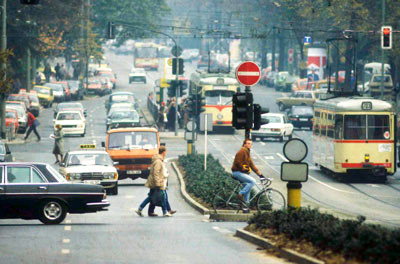 The themes concerning citizens are the oil crisis and new regulations to limit damage to the environment, together with the impact on road traffic, as well as the 0.8 per mill limit, the safety belt, and 100 km/hour speed limit on country roads. Automobiles are increasingly constructed and assessed from a safety perspective.

The major topic in the 1970s is safety. Extensive safety programmes for children spring up. The Federal Institute develops substantial new regulations for driver education, the education of driving instructors as well as the retraining of motorists who come to the attention of the police. The effects of drugs, medicine and alcohol on driving behaviour are examined.

The BASt builds large-scale testing facilities and develops a driver performance measurement vehicle to record all the reactions of vehicle drivers on journeys. New methods are developed to investigate driver behaviour.

The Eighties – Efficiency and environmental protection 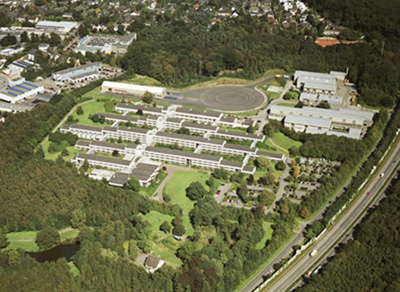 1983: Relocation of the BASt to a new building in Bergisch Gladbach. The building in Cologne had become too small over the years. In addition, various departments had been located in several rented buildings. The new premises, on a site comprising some 20 hectares in Bensberg near the A4 motorway, include an office complex as well as ten testing halls containing in part unique large-scale test rigs.

Instead of the expansion of the road network, the maintenance and qualitative improvement of roads and bridges now gains in importance. The general discussion on environmental protection issues results in stronger attention being paid to new goals not only in the area of vehicle construction but also in road construction.

The Nineties – Reunification and integration 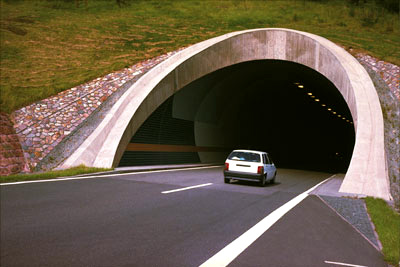 Germany becomes overnight a transit country for road traffic in the heart of Europe. Traffic congestion over hitherto unknown distances and duration multiply. The increase in road haulage transport, in particular, presents many problems. Themes such as preventing traffic and the modal shift of traffic arise. Attempts are made to prevent gridlock with the use of telematics.

The overall infrastructure in the former East Germany is unable to cope with the mass motorisation that suddenly emerged. Modern safety standards do not exist for the provision of roads, bridges and tunnels.

The progressive European integration means that the cooperation in international working groups is becoming increasingly important. The Federal Republic of Germany has a keen interest in being able to maintain its comparatively high standards in the overall road network. This does not only hold true with regard to roads and vehicles.

The standardisation of different norms in areas such as driver training and traffic monitoring is also a task facing the BASt - as is quality assurance. The BASt becomes the national driving licence procedure assessment centre. 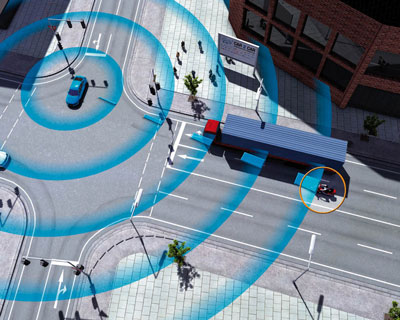 In 2010, the number of people killed in traffic accidents sank under 4,000 for the first time since the introduction of accident statistics in 1953. Despite this success, the BASt is continuing its work to prevent accidents and reduce their effects. Programmes for special road user groups as well as constantly improved traffic and vehicle-related technical measures have made a major contribution in reducing the accident figures.

Cooperative traffic systems are now gaining ground. These are systems, in which the vehicles communicate with each other as well as vehicles and the infrastructure with each other. These systems not only ensure safer traffic, but also improve traffic flow as well as reduce petrol consumption and exhaust emissions. Electric vehicles are gaining in importance as a factor in cutting pollutants and noise.

Climate change, environmental and health protection issues as well as economic constraints require new and intelligent concepts. It is essential to make use of state-of-the-art technologies and building materials – using recycled materials as far as possible – for the roads of the future, in order for them to withstand the constantly growing stresses. The extraction and use of natural energies on the part of road traffic represents one of the challenges of the future.