There are many different driver assistance systems on the market that make driving safer and more comfortable. Lane-keeping systems can also perform both of these functions. Warning systems alert drivers via visual, acoustic or haptic signals if the vehicle unintentionally leaves the lane. Active systems can also independently intervene in the steering of the vehicle and, for example, keep a vehicle in the lane or steer it back into the lane. The next step are such systems that temporarily and in certain situations take over the entire guidance of a vehicle.

BASt has played a major role in adapting UNECE Regulation Number 79 for continuously assisted steering functions. Systems for continuous lane guidance, key parking and assisted lane change, for example, have already been implemented and are available on the market. In March 2020, a new draft regulation for the first highly automated lane keeping systems (ALKS: Automated Lane Keeping System) was submitted to the UNECE for a vote in the first instance and was adopted. In June, the draft regulation was finally adopted at the decisive instance. The first vehicle systems for highly automated driving have thus received the necessary international regulatory framework for approvability. 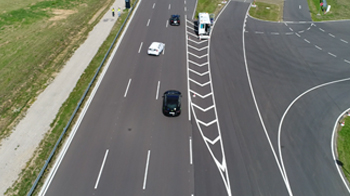 ALKS is the first electronic system in a vehicle that allows drivers to be temporarily relieved of the duty of driving completely in partial areas of road traffic, for example in a traffic jam on the motorway. The prerequisite is that the vehicle is able to take over this task completely in the defined areas. For this purpose, the ALKS must take over the longitudinal guidance of the vehicle in addition to the lateral guidance. The system must recognise its functional limits in time to ensure a safe handover back to the driver with the appropriate clear prompt. The system shall continue to perform the driving task for at least 10 seconds during a handover before initiating a manoeuvre to achieve a minimum risk condition. If a critical situation suddenly arises during an automated journey in which a handover to the driver is no longer possible due to the short time available, the system must be able to master the situation independently, for example by emergency braking or evasive action.

BASt has closely accompanied the development of this draft regulation and supported the BMVI by defining requirements, conducting driving tests and developing test scenarios for automated vehicles and questions regarding driving data acquisition and driving data storage.