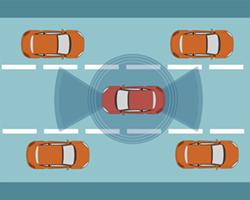 The automation of the driving function offers the chance that accidents usually caused by humans can be avoided. However, if the driving task is taken over by the vehicle - i.e. the human is allowed to turn away - an adequate reaction to critical driving situations must be ensured by the vehicle.

The situations that automated vehicles have to cope with depend on the area of application of the automation. In principle, however, they are comparable to those situations that are relevant for today's active vehicle safety systems - for example, emergency brake assistance systems. However, the requirements for technical capabilities go far beyond this: while emergency brake assistance systems are generally not allowed to overrule humans, automated driving functions must generally ensure that accidents do not occur in the first place.

Currently, concrete approval requirements for automated driving functions and corresponding test methods are being developed under the umbrella of the United Nations as well as in a small working group of the European Commission. It is becoming apparent that automated driving functions will initially come onto the market for congestion situations on motorways and motorway-like roads. Critical situations in this comparatively structured traffic environment can arise, for example, from non-automated vehicles swerving in and out of traffic and from braking manoeuvres by the traffic ahead. In addition, it must be ensured that people on the carriageway - for example in the event of breakdowns or in roadworks - are not endangered.

BASt is significantly involved in the development of the above-described requirements for automated driving functions at UN level. Together with the Joint Research Center ("JRC") of the European Commission, BASt is also working on a method for generating critical driving situations in driving tests largely at random. For this purpose, state-of-the-art technologies for dynamic driving tests are used, such as robotically controlled vehicles, self-driving target objects and highly accurate positioning. The aim is to simulate many critical driving situations that appear realistic for the vehicle sensors and to measure and evaluate the vehicle's reactions to them. The ultimate aim is to determine whether the vehicle is capable of surviving in real traffic.