According to official road traffic accident statistics, a total of 81,274 people were involved in accidents while cycling in 2016. In the process, 393 were killed and 14,485 seriously injured. Turning accidents are among the most serious cycling accidents. The consequences for cyclists are particularly serious when they collide with a goods road vehicle in a "blind spot" situation. A number of BASt studies have therefore dealt with the subject of "blind spots".

In addition to investigations into the occurrence of accidents, the question arises as to which structural and operational design offers the highest level of safety at the junction. Currently, turn assistance systems are being discussed that specifically warn trucks when they are turning if a bicycle could be overlooked. Requirements for the performance of such turn assistance systems and their effectiveness do not yet exist. However, such requirements are the basis for the legislator to introduce an obligation to install these systems.

Extrapolation of the accident occurrence

In cycling accidents, the conflict between goods vehicles turning right and cyclists going straight ahead in the same direction is of particular importance. Due to the high severity of injuries, such conflicts are particularly serious. The exact number of accidents and the severity of accidents that may be related to the "blind spot" of a goods road vehicle were unclear. One reason for this is that the conflict situation "blind spot" is not explicitly recorded in the official road traffic accident statistics. 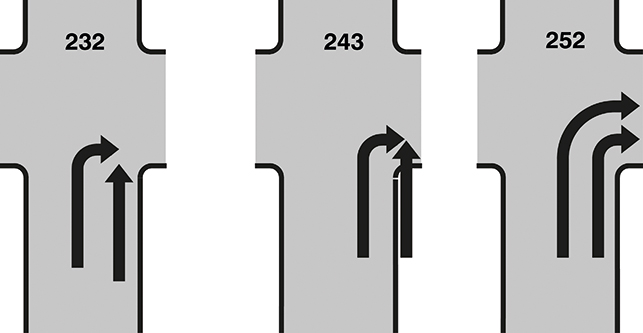 Types of accidents used to describe the "blind spot" situation

Furthermore, a differentiation of the goods road transport vehicles was carried out according to the permissible total weight. It became clear that "light" goods road transport vehicles under 7.5 tonnes only contribute insignificantly to the serious consequences of accidents. In contrast, a "heavy goods vehicle" was involved in 90 percent of the cyclists killed in "blind spot" situations. If a heavy goods vehicle and a bicycle collide in a "blind spot" situation, on average one person riding a bicycle is killed in ten accidents with personal injury; in collisions with light goods vehicles it is "only" one in 549 accidents.

The extrapolation to the federal territory for 2012 showed that about 640 accidents with personal injury with 23 fatalities and 118 seriously injured persons are due to the accident situation between goods road vehicles turning right and bicycles going straight ahead, which may be related to the "blind spot" of a goods road vehicle: This corresponds to one percent of all cycling accidents and about six percent of the total of 406 fatalities.

Constructional and operational aspects of junctions

In the BASt research project "Blind spot - conflict between trucks turning right and cyclists going straight ahead", the road safety deficits were analysed. Here it was shown that an area-wide distribution of these accidents or an accumulation very rarely occurs at a junction arm. There was also no particular accident preference for one type of cycling mode, and no significant differences in the time of the accident (time of day/year), weather conditions or gender. Almost all accidents resulted from free travel without prior traffic-related stops.

Basically, the question arises as to which structural and operational design offers the best safety at the junction, for example by ensuring good visual relations between lorries and cyclists as well as completely conflict-free signalling phases. In addition, there are other possible solutions, such as bringing the stop line forward and/or a time advance for the release times of the cycling traffic at the beginning of the green time, as well as other marking solutions in the technical design regulations.

The unprotected road users are often run over without truck drivers being able to perceive them beforehand. The study "Danger to pedestrians and cyclists at intersections from trucks turning right" already analysed in detail the issue of insufficient field of vision for truck drivers to the front and on the passenger side. In the meantime, improvements in direct visibility from the vehicles and especially indirect visibility via mirrors have been implemented. Mirrors make it possible to minimise the "blind spot" in HGVs. With the introduction of Directive 2003/97/EC, a larger field of vision was prescribed, so that trucks generally have to have six mirrors to cover it. Furthermore, Directive 2007/38/EC stipulated that HGVs over 3.5 tonnes that entered circulation on or after 1 January 2000 had to be retrofitted with appropriate mirrors on the passenger side by 31 March 2009. However, for the mirrors to have a positive effect, it is always a prerequisite that they are correctly adjusted and that drivers also use them and correctly interpret what they see in particularly complex traffic situations and react accordingly.

BASt designed a test procedure for truck turning systems to be used in the lower speed range of inner-city traffic. It is expected that a driver assistance system that meets the requirements will have a positive effect on accidents between trucks turning right and bicycles. Based on the analyses of the accidents, characteristic parameters and accompanying circumstances of accidents between bicycles and trucks turning right were determined. The relevant speed range is up to 30 km/h for trucks and up to 20 km/h for bicycles. The movement of trucks and bicycles is initially parallel in a range between 1.5 and 4.5 metres. The accidents occur predominantly on inner-city roads. Based on the identified parameter space, the time required for a comfortable stop and a suitable kinematics model, the spatial areas around the truck can be defined in which an environment recognition system must be able to detect bicycles so that the information signal is issued by the assistance system to the truck drivers in good time. Within the parameter space, such parameter combinations can be singled out as test cases that almost completely cover the necessary field of view of the environment detection with as few cases as possible.

Germany has submitted a proposal for requirements for a turn assistance system to the United Nations. There, twelve different test cases have been defined so far - using the target object already known from consumer protection and the movement device used there.

A systematic variation of these parameters describes the range in which the truck and bicycle can move and thus also the required sensor viewing areas. For the regulatory test procedure, parameter combinations are specifically selected so that the sensor visibility range is covered as well as possible with as few test cases as possible.

In contrast to tests in consumer protection, the driving tests here are driven by human test subjects: In the case of trucks, the exact trajectory driven depends heavily on the vehicle type and configuration (for example, articulated truck with or without semi-trailer). Therefore, a corridor is specified for the driving tests, which must be adhered to during the course of the test.

As a pass criterion for this type of test, it is currently proposed that information is given so early that the truck can still come to a stop in time and comfortably (with a reaction time of, for example, 1.2 seconds and a delay of 5 m/s²). In contrast to a warning, information is low-threshold and ideally not disturbing - the analysis of the accident data shows that in real traffic situations this information must already be given before the turn is initiated. Effectively, therefore, information is given for each overtaking or passing bicycle. A high-intensity, disturbing warning noise would not be acceptable for such a system design.

A parallel possibility to improve the situation with regard to the right-hand turn situation in focus would be to further improve the visibility of the truck drivers by using camera monitor systems, with which areas that are otherwise not visible can be made visible, especially in the turning situation with an articulated truck. The bird's-eye view of the truck and its surroundings by combining different camera images also belongs to this category of visibility-enhancing solutions. BASt is also investigating the use of camera-monitor systems in cars and trucks in order to clarify both technical aspects and aspects of the human-machine interface. The results of these investigations will be used to define minimum requirements for camera-monitor systems to be installed in motor vehicles instead of mirrors. Ideally, information and warning systems in the form of camera-monitor systems and turn assistance will be linked in the future in order to achieve optimum information and thus further increase safety.

The occurrence of accidents, and in particular the consequences for cyclists when they collide with goods vehicles in a "blind spot" situation, represents a challenge in road safety work. The aim of all stakeholders at national and international level is to avoid or mitigate the serious accidents between trucks turning right and cyclists. Accordingly, it is expected that corresponding systems will be introduced on a mandatory basis at an early stage - for example as part of the revision of the EU's General Safety Regulation, which will take effect from 2020. This requires adoption of the regulation in the technical bodies of the United Nations.