Project for the establishment of generally accepted quality criteria, tools and methods as well as scenarios and situations for the release of highly automated driving functions

Automated driving is considered one of the most important future topics in automotive development: Industry and research hope for a reduction of accidents, a decrease in fuel consumption and a better use of traffic space.

According to the international standard of SAE International (SAE J3016), vehicle automation is divided into 5 levels. From level 3, drivers can perform non-driving activities and the system controls the vehicle. Drivers do not have to monitor the system. However, they must be able to take over control at any time if the system prompts them to do so. A near-future application example is the motorway chauffeur. This enables a Level 3 function to be used on motorways and motorway-like roads and served as an application example in the project.

With the help of the PEGASUS project, which was completed in June 2019, significant gaps in the area of testing up to the release of Level 3 driving functions were to be closed. The aim of the overall project was to develop a procedure for safeguarding and testing automated driving functions in order to enable the rapid introduction of automated driving in practice. BASt was involved in the project as an associated partner on behalf of FAT e. V., alongside 17 partners from science and industry. 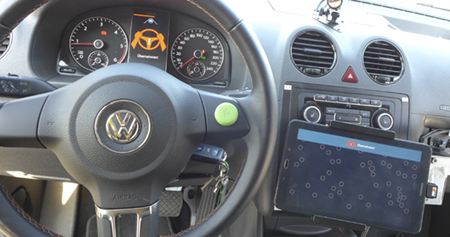 BASt identified potential risks that could arise during the interaction between a Level 3 vehicle and the driver. In a field test, the BASt scientists first looked at the influence of traffic density on the driver's handover performance. In driving tests on federal motorways in the Cologne/Bonn area, they analysed possible safety risks during the handover of the driving task to the driver. These allow an initial assessment regarding the influence of the traffic situation. Subsequently, the experts investigated on a test route whether a preceding automated drive has an effect on the handling of unexpected events following the successfully completed takeover.

The Pegasus project had a total budget of 34.5 million euros. It was funded by the Federal Ministry for Economic Affairs and Energy within the framework of the programme "New Vehicle and System Technologies" with 16.3 million euros. The BASt was involved in sub-projects 1 "Scenario analysis and quality characteristics" and 3 "Testing".