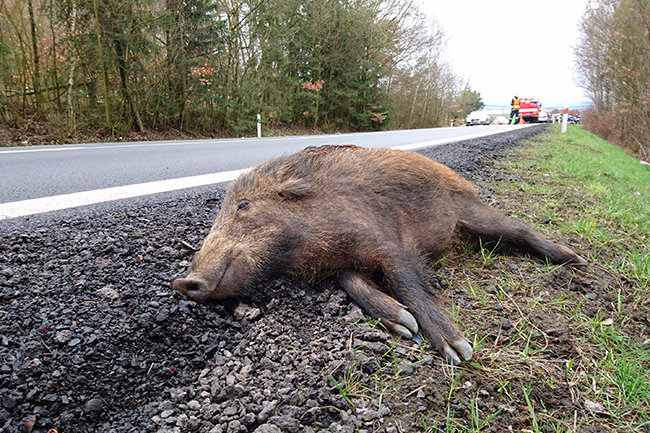 In June 2017, a full-day expert workshop was held at the BASt on the concepts and effects of measures to prevent wildlife accidents. The main topic was the presentation of the results of a first research project on the analysis of the effects of different optical wildlife warning modules.

Together with BASt experts from the fields of environmental protection, road traffic technology, traffic psychology, road operation, vehicle safety and automated driving, more than 40 experts from Germany and Austria exchanged their experiences with regard to international wildlife accident research.

The BASt focuses on the following topics in this area:

In the federal accident statistics, wildlife accidents are recorded along with serious personal injury or fatalities. The vast majority of traffic accidents involving game are "minor accidents" which are not recorded by the police in every federal state. For example, it is often not known on which road sections there are frequent wildlife accident sites. A uniform standard and data transparency in the recording of wildlife accidents are required for the effective control of wildlife accident prevention measures. An inventory of the accident recording modalities and a supplementation and, if necessary, upgrading of other data sources, such as animal find registers and game reports, can considerably improve the database on wild game accidents and form the basis for further analyses.

Influencing the game to avoid conflicts

Little is known about the behaviour of wild animals on roads in Germany. A study on the perception of the road and road traffic by deer using GPS-supported spatial observation confirms a large variance in the behaviour of animals in road space. Deer that have integrated roads into their habitat and have adapted to road space and traffic rarely avoid roads even during the day.

In order to keep the wild animals away from the road, various methods have been developed. In particular, scent barriers, reflectors as well as acoustic wildlife warning and combination products are attached to roads by hunters and some road construction authorities. Statements about the effectiveness of the measures could not be reliably derived so far, because either the investigation framework or the applied methods were not used scientifically flawlessly. Research and surveys are currently being carried out by various institutions in which statistical evaluations of changes in accident frequencies are to be used to determine the influence of scent barriers and wildlife warnings on game.

Influencing road users in the event of impending conflicts with wildlife

The use of wildlife warning systems requires the existence of a multi-lane, flat road with game protection fencing on both sides. The functionality of electronic wildlife warning systems on federal highways is based on a permeable area about 50 metres wide within a wildlife fence several kilometres long, through which wild animals can cross a federal highway. If animals are detected within the detection field in the permeable area, this is indicated on variable traffic signs together with a speed limit. In order to increase the reliability and effectiveness of a wild animal warning system, further investigations must be carried out.

Automated driver assistance systems contribute to road safety by compensating driving errors and relieving the strain on the driver. The transmission of relevant information by vehicle sensors and infrastructurally installed sensors enables animal crossings at wildlife warning systems to be displayed directly in the vehicle. Sensors in the vehicle can also react to obstacles in the road side area.

In order to avoid accidents, wildlife fences are used in particular on highly frequented federal highways. In application of the Wildlife Protection Fence Directive (WSchZR, 1985), for example, considerable funds are being invested in protection systems to increase traffic safety. However, it is not yet known which protection systems are how efficient, thus how biologically effective and economically suitable for large-scale use.

Further investigations are necessary to improve the efficiency of wildlife fences and to further develop the underlying regulations and adapt them to newer requirements.

The food supply for wildlife has changed in recent decades as a result of changes in agricultural structures, emissions and climate change. Animal populations relevant for the planning of wildlife fences have often increased. The separating effect of roads between resting and food habitats simultaneously leads to conflicts. For this reason, it is necessary to investigate the influence of agricultural use or the use of compensation areas on roads with a focus on wildlife accidents on the frequency of wildlife accidents and how this can be quantified.

Wildlife habitats in Germany are fragmented by the dense traffic network and the increasing volume of traffic. These land losses reduce and isolate animal habitats. The high volume of traffic leads to animal losses, which can threaten the population of endangered species. Disturbances caused by people's leisure behaviour also lead to changes in the use of habitats. By networking these areas by means of green bridges and the establishment of rest zones, fragmented areas can be connected and the number of wildlife accidents reduced.