Since the beginning of this decade, automatic emergency braking systems for passenger cars are available. These systems can prevent or at least mitigate car accidents. They detect an impending accident and prepare the vehicle, for example by pre-tensioning the belts, closing windows, or trying to draw the driver's attention to the traffic by warnings (for example brake hard). If the accident can no longer be avoided, even when the driver brakes strong, these systems also automatically brake with the aim to reduce the collision speed significantly or completely.

Braking systems for accidents involving pedestrians or cyclists have been introduced into the market at the beginning of this decade; at present, such systems are available only in a few types. 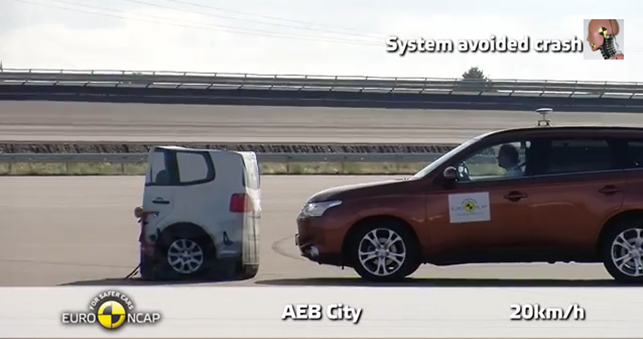 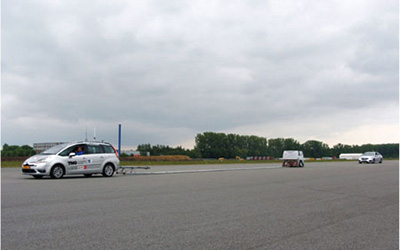 From the beginning of 2014, Euro NCAP (European New Car Assessment Programme), has been evaluating emergency braking systems’ performance. The test scenarios, in which the emergency braking systems have to prove themselves, were derived from accident data, and include constellations with hitting standing, slow-moving or braking cars driving ahead. The main parameter of a test is the initial speed of the vehicle under test. The main outcome is the reduced impact speed or accident avoidance, respectively. In some test situations, the response of a human driver to a possible AEB warning signal is simulated by a brake robot.

In order to make meaningful comparisons of different vehicles and herewith different system concepts, a test method is required that is suitable for all types of sensors, and which can be mapped to realistic driving situations. A standard tool for testing of emergency braking systems is the so-called "EuroNCAP Vehicle Target" (EVT). EVT is a rubber surrogate vehicle which is equipped so that it appears like a car to the vehicle's sensors, and thus represents the vehicle ahead. The target must both drive and be able to withstand a crash. For test scenarios in which the vehicle ahead is moving, the EVT can be moved on rail-like trailers.

For 2016, an evaluation of pedestrian emergency braking systems is planned as the next step: The development and fine tuning of the test procedure, also with the support of BASt, is already close to completion. A pedestrian dummy made of foam is used for this purpose, which is during the test moved in front of the test vehicle. Different impact positions and speeds of the pedestrian dummy are tested, so that the overall test constellations cover broad accident scenarios.